The ploughmans vindication or A confutation of some passages preached in divers sermons by Sherland Adams sometimes minister of Treeton in the county of Yorke. In which sermons he uttered much bitternesse of spirit against all those that sided with the Parliament; as also cherishing the malignant party, and much animating them to persist in their bloody Designs. herein also is shewed the lawfulnesse of informing against all such incendiaries; and the judgements threatned in holy Scripture against such as know and do not reveal their wickednesse. Together with XII quaeries whether the said Adams (or any such ceremonious priest) be a minister of God, yes or no? 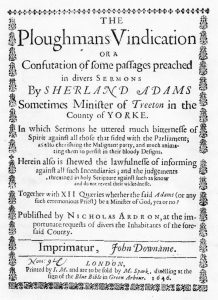 I can truly certify that these parties are religiously disposed and well affected. John Bright.

Master Adams his demeanours are not so well known unto me, as the persons that have subscribed this Certificat, That the said persons in number 40 are all of them religiously disposed, and well affected is known

John Bright before mentioned, is a Collonel of Foot, and Governour of Yorke.

Edward Gill before mentioned is a Captaine, and hath the government of Sheffeld Castle.